The Banquet of Chestnuts is the fourth episode of season three, and the twenty-third episode of the series. It was written by Guy Bert, and directed by Jon Amiel. It will premiere on May 5, 2013.

Newly appointed Cardinal Farnese – promoted at the request of his sister Giulia – is placed in the Treasury and quickly discovers Versucci’s theft. Micheletto is sent to find the wayward Cardinal. Meanwhile, upon hearing of Venice’s request for help against Turkish pirates, Alexander, seeing this as an opportunity to replenish the coffers, dramatically calls for a Crusade. Concerned about the loyalty of his new Cardinals, Giulia arranges an orgy for them – the “banquet of chestnuts” – but it is a trap and details of the Cardinals’ sexual activities are recorded to extort their future loyalty. Elsewhere, King Ferdinand learns that Lucrezia and Alfonso’s marriage has not been consummated and demands a public display of their love-making. Lucrezia is humiliated, but the experience seems to increase the incestuous attraction between her and her brother.[1]

Every photo of The Banquet of Chestnuts on this wiki can be seen here. 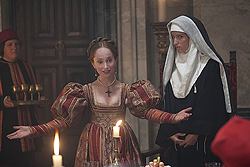 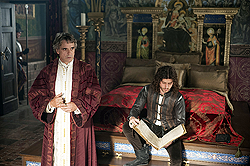 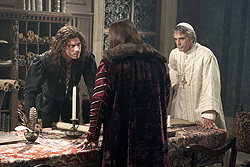 Cesare Borgia, Ferdinand II of Naples and Rodrigo Borgia
Add a photo to this gallery

Retrieved from "https://the-borgias.fandom.com/wiki/The_Banquet_of_Chestnuts?oldid=6565"
Community content is available under CC-BY-SA unless otherwise noted.